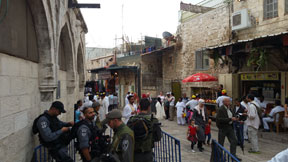 Walking around Jerusalem, it is very common to see police and soldiers carrying assault rifles slung over their shoulders.  For our tour guide Chana, an Orthodox Jew, it makes her feel safe and secure.  And yet, there seems to be stabbings each day despite the pervasive police/military presence.  Every tourist area has a police checkpoint.  This picture was taken on the Via Delarosa in the Muslim Quarter of Jerusalem.  Only a few meters away (I’m becoming non-American by using the metric system), a man and a baby were stabbed about two weeks ago.

We took a visit to the Garden Tomb, the traditional spot some Protestants believe Jesus’ tomb resides.  Our guide, Chana, didn’t feel safe to venture to this area simply because her Jewish head covering made her a target.  But as tourists, especially as tourists that don’t look Jewish at all, she thought we were perfectly safe.  As we were walking to the tomb, admittedly you do feel a bit of the tension of the area.  In fact, as we were leaving the tomb, we either heard gunshots, an explosion, or a backfiring car.  Everyone jumped at the sound, including the native Muslims of the area.  Everyone is a bit on edge here.

But thankfully, we found a group of African Christians who were walking back to the same hotel.  And so we hitched a “walking ride” back home with them.  I don’t think we were in any ever real danger.  But again, it just seems the whole city is powder keg these days.